Creation of the Department 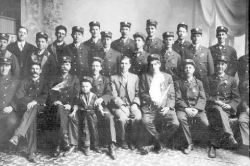 The Murray City Fire Department was organized in 1906, just four years after the City of Murray was incorporated. The department originally consisted of 25 volunteer firefighters.

The following month, a constitution and set of bylaws were drawn up and adopted for the Murray City Volunteer Fire Department. The department was officially organized on August 6, 1906. The first Fire Chief in Murray City was M. F. Nogal.

The Fire Prevention Bureau was established in 1973. Captain Earl Healy was put in charge of the Bureau, utilizing manpower from the ranks of the on-duty firefighters to complete fire inspections of businesses. There were 425 building inspections done that year. By 1976, the department had 18 full-time firefighters and 23 volunteers.

In the late 1970s, the Murray City Fire Department initiated an Emergency Medical Response Program. In 1977, the department responded to 142 medical assist calls. That number jumped to 483 in 1978. A medical squad was put in service and the department began training personnel as Emergency Medical Technicians. In 1979, medical assist calls increased to 896. Full-time staffing was increased to 22 full-time firefighters that same year.

In 2000, the Murray Fire Department implemented advanced life support (paramedics) response to enhance the outstanding services that we previously provided. In that year, we responded to 1,020 fire-related emergencies and 2,523 emergency medical calls.

Currently our department responds to over 6000 emergency calls a year. We have 68 employees (57 response personnel and 11 administrative and fire prevention staff.